The risk of long-term damage from concussions has been widely publicized in recent years, but one group—youth athletes—may not be getting the message. Recent reports found that Massachusetts not only ranked first in the nation for the number of concussions diagnosed per capita, but half of all young athletes who are diagnosed with concussion-like symptoms return to play the very same day of their diagnosis.

These facts and other lapses discovered through surveys and reporting revealed that school athletic programs and medical professionals are still placing youth athletes at risk by not following best practices for concussion treatment and reporting, some of which were enacted into law several years ago.

One study by Blue Cross Blue Shield found an 82 percent increase in youth concussion diagnosis rates in Massachusetts between 2010 and 2015. That increase put the statewide rate at 27.5 concussions per year per 1,000 state residents under age nineteen, the highest in the country. Nationwide, the overall rate is less than sixteen per 1,000.

There’s reason to believe that the increase may be due to better awareness of the problem, not a sudden increase in head injuries. But there are other concerns, too. The Health and Risk Behaviors of Massachusetts Youth report found that while about 14 percent of state high school athletes reported symptoms of a concussion, fewer than half of them stopped playing for the day after the injury. That’s a disturbing revelation, because since 2011, the state has had regulations in place to make sure not only that students don’t return to play on the day of their injury, but also that they can’t return until they’ve been cleared by a qualified medical professional.

Lapses at All Levels

Schools are supposed to have prevention and monitoring programs in place and report head injuries to state health officials, but an independent investigation by the Boston Globe found that over 200 schools—more than 25 percent—did not do so in the most recent reporting period. In yet another unsettling development, a survey conducted by researchers at Mass General Hospital found that more than one-quarter of pediatric physicians in the state have not yet taken the free, state-required concussion training course.

Any kind of blow to the head, such as from a fall or a sports injury, can lead to serious consequences, even if the injury doesn’t appear serious at the time. The CDC estimates that about 2.5 million people go to the emergency room each year for some kind of traumatic brain injury (TBI) caused by a blow to the head. Falls and car wrecks are both major cause of TBI, but sports injuries are an important contributor to the total. About a quarter million of those annual visits were by children for sports and recreation-related incidents. The most severe of these injuries, when untreated, can lead to death or disability.

When you or someone close to you has had a traumatic brain injury, the most important thing to do is get proper treatment. But if that injury was caused by the negligent or irresponsible behavior of another, whether the driver of a car that crashed into you, the management of a cafeteria that didn’t clean up a spill which caused a fall, or the staff of an athletic department who didn’t properly care for their injured athletes, then your next step should be to discuss the situation with an experienced traumatic brain injury attorney.

Call the Law Office of Joel H. Schwartz at 1-800-660-2270 or contact us online through the form below to discuss your case. We offer a free consultation to all clients to go over the details of their situation and explore the options available. Get in touch today to learn more.

Drinking and Driving: Know the Facts

Traumatic Brain Injury, the Result of an Accident 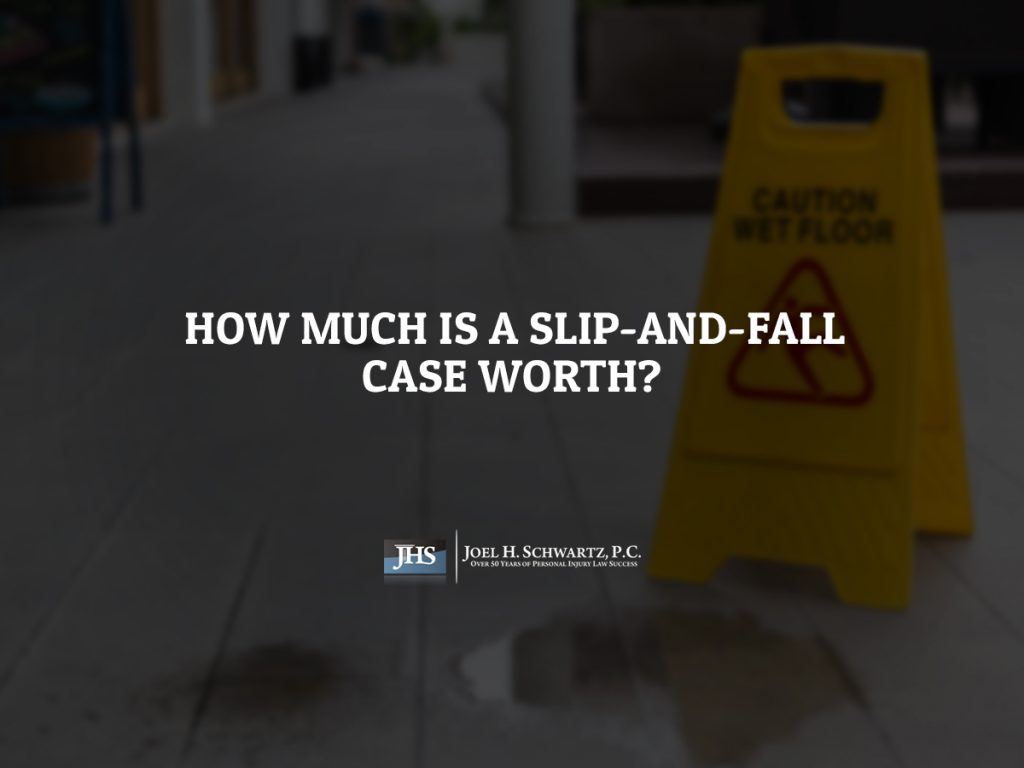 How Much Is a Slip-and-Fall Case Worth?